My first time backpacking in Bangkok: Days of Nightmare in Bangkok

My first time backpacking in Bangkok was a hell. I didn’t prepare enough. Actually, I didn’t prepare anything before I traveled to Bangkok except for the ticket from Seoul to Bangkok, a backpack, a new camera, and a passport. What’s worse, I moved out on the same day I flew to Bangkok! Crazy, right? Now I look back, it was so obvious that I was going to go through the hell for my first time backpacking in Bangkok.

My very first night in Bangkok

The weather in Bangkok was extremely hot, the streets were so busy! I was there with my friend Mr. helpful in the middle of Bangkok, panicking! Thanks to my helpful friend, I was able to get to the hostel right near Khao San Road. We arrived pretty late after taking two different buses, the subway once, and walking. Who said Bangkok is backpackers’ a must-go destination? I’m already feeling so exhausted backpacking in Bangkok. But I was so relieved that I made it to Bangkok anyway but I was almost starved to death. We went to the street vendor, and I tried my “first” Thai food.

It was a noodle soup with pork, some vegetables, and pig blood curd! Blood curd? There’s similar food called Sunjee made of cow’s blood in Korea, but I didn’t dare try it since I didn’t like the idea of eating blood! But I neither wanted to complain about a 40 Baht meal (= a little more than a $1) nor be rude to my friend who suggested it. (Of course, I was starving! Any food can be delicious when you’re hungry!) It turned out to be okay. I hypnotized myself that it was delicious! And it was worth trying for the experience. After that, we were super tired. But we couldn’t resist the idea of going to Khao San road as backpacking in Bangkok!

Khao San Road: A must-go place on your first night backpacking in Bangkok!

The street was full of shops, restaurants, bars playing music loudly, and people wanting to enjoy the nightlife on Khao San Road. People were busy dancing to the music right on the street and enjoying their “buckets” (literally, it’s a cocktail in a bucket). Now I feel like it’s a good decision I came backpacking in Bangkok!  I wanted to join them, but I was too tired. So I bought and drank my first “Chang” (Thai beer) with my friend, like warming up for my real party on Khao San Road the next day.

Eat Pad Thai & Drink Chang beer if you are backpacking in Bangkok?

The beer tasted better than I thought! We were still hungry since we hadn’t eaten anything but tiny noodle soup for more than 8 hours, so I had my first “Pad Thai” from another street vendor. It was so delicious! This is a good way to finish your exhausting first day on Khao San Road! “Eating Pad Thai, and drinking Chang beer!”

I have woken up thanks to a girl who was packing loudly in the dorm. It’s a typical way to get up in the morning in the hostel. I went out to eat and tried new food. I enjoyed street food a lot since it’s cheaper, fast, convenient, and most of all, it tastes good.

You might be curious about now. “Hello? What’s your problem, Miss?” “Didn’t you say you liked the food and enjoyed Chang beer on Khao San Road!” Well, the problem was Bangkok’s disastrous weather. It was too humid and hot. I couldn’t do anything. Seriously! I’m not joking! Thanks to the “great weather”, I just had no energy to do anything.

Winter in Bangkok was very different from Korean winter…

I went to Bangkok around 19 November. It supposed to be “winter”. Winter in Korea is pretty cold. It goes down to minus 20 degrees Celsius depending on where you are in Korea. But “winter” in Bangkok is more like hot summer! It reminded me of being in Shanghai in summer (which made me sweaty 5 minutes after taking a shower) which I hated so much! I was sweating just from walking around the streets for a couple of minutes. And my butt was really wet because of the sweat when I sat on the chair. It’s not glamorous and not ladylike at all!

Pressure as a first time backpacking in Bangkok

I felt I should do something touristic such as seeing temples, going to Yaowarat Road (Chinatown in Bangkok), or visiting the Red Light District. But I stayed in the hostel drinking free ice-cold water and feeling miserable about myself. I remembered being excited about quitting my job and pursuing my dream to travel around the world! But I was in a foreign country, doing nothing, feeling defeated. Not a good picture! : (

Getting out of misery!

But there were saviors! I met an awesome group of people in my hostel near Khao San Road. Two girls from Denmark and two guys from the Netherlands. We had a great time talking and hanging out in the hostel. Of course, we didn’t forget to party on Khao San Road!

We drank “buckets” and danced to the music on the street until the bars shut! I didn’t expect that partying on Khao San Road would be that good since it has a “reputation”, but it was so much fun! I think it’s a great way to meet new people and experience part of Bangkok. I was feeling better about my decision of backpacking in Bangkok.

On Sunday, I went to the Bangkok Chatuchak Weekend Market with my friend, wandered around the area, did some shopping, had coconut ice cream, and tried street food. We were all satisfied with our food, and it was so cheap! I also had my first Tom Yum noodle soup. Don’t forget to say “not too spicy!” (My friends couldn’t finish their Tom Yum the other day at the floating market.)

Overall, the market was okay. I was a bit disappointed since my expectations were high, and I thought that there would be something really special about it. But it was just a market. Or I’m the one who didn’t explore enough. I think it’s good to visit once for the experience.

The next day, I felt that I should be productive. I couldn’t miss out visiting temples in Bangkok as backpacking in Bangkok. So I decided to go to Wat Pho with my friend.

Buddha statues in Korea are usually gold like Thailand’s but we don’t have a reclining Buddha which represents the state of Nirvana. It was so massive! It’s interesting to see differences between Thai and Korean temples. Let’s say, Thai temples seem to be bigger, and more glamorous with vibrant colors! You will find out if you visit both Korean and Thai temples.

According to my friend, Wat Pho is less crowded, more beautiful and peaceful than the Grand Palace. I especially loved being in one of the halls with Buddha statues.

I sat down in front of Buddha, and all of sudden, I felt so peaceful inside. I closed my eyes, felt the energy of the place, and found myself talking to Buddha. Do I sound crazy? Maybe…… It was the first time I felt so calm and relaxed since I came to Bangkok. Even though Bangkok hadn’t been that nice to me for a couple of days, it was totally worth leaving Korea and finding myself sitting there. Wat Pho treated me well, really really well.

The end of my time in Bangkok

On the last day of my visit to Bangkok, I realized it was good that I came backpacking in Bangkok after all! Even though I hadn’t done must-do things in Bangkok, I partied hard on Khao San Road, made very good friends, and had nice food.

Backpacking in Bangkok for 7days?

If you don’t mind getting sweaty and smelly, and if you’re ready for partying, good food, making great friends, and visiting fabulous temples, then backpacking in Bangkok is the right thing to do!  Thanks for reading my humble writing.

Do you want to read more about my travel stories?

Are you going to the north of Thailand as well?

16 thoughts on “First time Backpacking in Bangkok for 7 days” 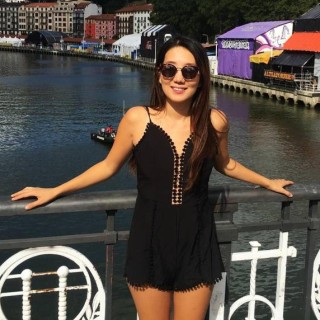